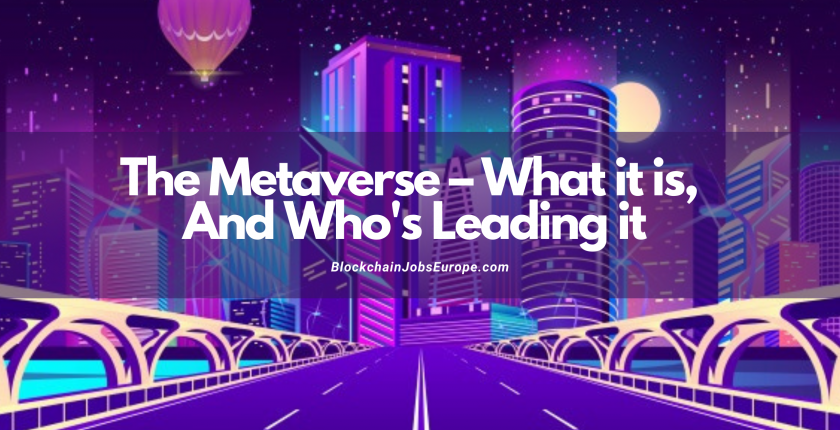 The Metaverse – What it is and Who’s leading it

Dubbed to be the future of the internet and expected to be an $800 billion industry by 2028, the metaverse is a topic dominating tech conversations globally. With top companies like Meta (previously Facebook), Microsoft, Nvidia, Roblox, Epic Games, and many more moving to grab the first-mover advantage to decentralized metaverse giants like Sandbox, Axie Infinity, Enjin, Decentraland, and Gala attaining new heights of success, the metaverse narrative is in full swing. In this article, you will learn about these top decentralized metaverse projects.

However, before moving forward with the metaverse projects, let’s first understand what exactly is the metaverse. Frankly, it’s not easy to explain metaverse as it just does not exist yet. But then unicorns too only exist in the imagination, still, one can define and describe them with fair accuracy. So why not the metaverse? Perhaps because unlike in the case of the unicorn where a consensus has been achieved over its characterization, when it comes to the depiction of the metaverse, everybody has their own general idea of it yet no one can accurately predict what the future holds for the supposed next generation of internet-induced reality! “Internet-induced-reality”, well, maybe, this is what the metaverse will be.

Again, what is the metaverse?

Let’s just say, the metaverse can be defined as an alternate reality powered by a worldwide web, where the internet users won’t be just spectators but a core part of the 3D virtual world in the form of digital avatars. It will be an intersection of Augmented Reality (AR), Virtual Reality (VR), Mixed Reality (MR) or to simply call it a world of Extended Reality (an amalgamation of AR, VR, and MR). To understand the concept more clearly, take a look at an excerpt from Mark Zuckerberg’s Founder’s letter, released on the historic occasion of Facebook’s rebranding to Meta in 2021: “In the metaverse, you’ll be able to do almost anything you can imagine—get together with friends and family, work, learn, play, shop, create—as well as completely new experiences that don’t really fit how we think about computers or phones today…In this future, you will be able to teleport instantly as a hologram to be at the office without a commute, at a concert with friends, or in your parents’ living room to catch up…You’ll be able to spend more time on what matters to you.”. This particular definition is more or less the vision of the majority of metaverse enthusiasts. However, that vision will take a lot of time to manifest into a reality, if ever. The vision that presently dominates the metaverse ecosystem is that of GameFi.

GameFi, a portmanteau of blockchain gaming and decentralized finance (DeFi), is a new fad sweeping the Crypto world. More popularly known as ‘play-to-earn’ gaming, it is a concept that aims to revolutionize the gaming industry by merging it with the elements of decentralized finance. Even though online gaming has been a multi-billion dollar market, the incentives were hardly ever redeemed by the major creators of that value, the players. The profits were largely reaped by the developing platforms as the owners of those in-game assets. Through blockchain technology, GameFi solves two issues. First, the complications in establishing the ownership of virtual goods, which is addressed by the effective mechanism of Non-fungible tokens (NFTs) in play-to-earn models. And second, pertaining to availability of marketplaces and ease of trading for converting and withdrawing the real value of these in-game commodities.

In the crypto gaming setting, participants are also the owners of digital possessions that are easily tradable on integrated crypto exchanges. The virtual goods market stood at approx. $38 billion in 2017 is expected to grow by 500% by 2025, and the player community rightly wants to share a part of it (63% of the gaming participants acknowledged the willingness to spend more if the virtual gaming goods had carried real value and 46% expressed interest in possessing real ownership of their virtual assets, as per a survey conducted by Vorhaus Advisors).

“Earn while having fun”, a narrative of play-to-earn platforms, has been fairly successful even in its current nascent stage. And at the forefront of this gaming revolution are a few decentralized metaverse giants mentioned below.

Founded in 2009, Enjin is a blue chip project of the decentralized metaverse space. Primarily focused on assisting the gaming community in developing, monetizing, and managing virtual articles on the Ethereum blockchain, Enjin now provides three sets of solutions, serving three groups; individuals curious to explore the metaverse, businesses willing to tokenize and monetize their assets into NFTs, and developers looking for readily available software development kits, APIs and tools to build and integrate NFT games, apps, and websites. The USP of Enjin lies in allowing the users to not only mint their digital or real-world assets, such as music, art, gaming items, sports collectibles, into next-gen NFTs but also in providing a marketplace for these assets to be traded readily. Thus, Enjin serves as a comprehensive platform facilitating the generation, monetization, and exchange of virtual goods resulting in the creation of self-sustainable digital economies.

With a valuation soaring to $3 billion at the time of writing, and millions of daily active players, Axie Infinity is arguably the decentralized metaverse gaming’s biggest success story. Axie stormed to popularity in August 2021, when it broke into the top 50 crypto assets based on market capitalization. The question here is what prompted such wild growth for Axie? The answer lies in Axie’s success in addressing one of the most crucial criticisms of the blockchain and crypto industry: that it is unable to transform its abstract ideas into concrete utility creation. Apart from investment/trading avenues, people often fail to acknowledge the true monetary potential of blockchain. Axie serves as the prime example of countering that point. Axie proved that blockchain gaming can result in becoming a legitimate source of income generation too. From the outliers success story of young gamers buying two homes exclusively based on gains realized from the game to shared satisfaction of countless Filipinos earning enough for survival amidst a deadly pandemic to Phillippine govt looking to draft a special tax structure solely for Axie players, all these stories speak volumes about the materialistic value generated by this GameFi leader.

Popular as the real estate pioneer of the metaverse ecosystem, Decentraland has been witnessing a plethora of exciting developments in recent times that saw the value of its native token (MANA) soaring sky high. The most prominent developments being; tech giant Samsung launching its first metaverse store, Samsung 837X, a replica of the South Korean brand’s flagship physical store situated on 837 Washington Street, New York; UNXD, a luxury NFT marketplace hosting inaugural Metaverse fashion week, to be held soon after the conclusion of on-site fashion shows set to take place in major fashion capitals; Barbados announcing the plans to open its digital embassy making the tiny Caribbean island to become the first country with a metaverse office for foreign affairs and Token.com acquiring land worth $2.3 million in the Fashion Street Estate district of Decentraland in what is known as one of the biggest virtual land acquisitions. And these accomplishments are merely a beginning for this decentralized metaverse blue chip.

From a tract of land being sold for $4.3 million to a Mega Yacht being auctioned for $650,000 and from Adidas launching NFTs to Snoop Dog hosting his virtual concerts, Sandbox is one vibrant virtual economy that even some real-world economies would envy. Initially founded to compete with Minecraft in 2012, Sandbox’s migration to blockchain technology started in 2018, well before the metaverse hype. The game’s recent success can be credited to the developers who envisioned the decentralized play-to-earn model before the idea went mainstream. Sandbox is a community-owned virtual world where participants can design, share, monetize and trade in-world assets and experiences. The hugely positive reception of Sandbox’ concept even prior to going fully live principally reinstates the belief that the players are excited about an ecosystem where they are able to reap the economic benefits of the in-game assets designed and invented by them.

Another one of the OGs, Gala is an Ethereum-based gaming solutions provider. In contrast to other decentralized metaverse giants with their own flagship games, Gala hosts a number of games in its network. Consider a scenario where other games are states with their own sovereign currency subject to limitations of being legal tenders within a certain geography, Gala is that one state whose native utility token, GALA, is accepted across multiple borders aka games. The GALA token can be used between multiple GALA game participants, thus resulting in the creation of a more immersive virtual environment with even more use cases and opportunities. Considering, the Gala platform is working on its own native blockchain, GALACHAIN, to improve the efficiency of the network and more game developers are excited to explore the possibilities provided by blockchain, this play-to-earn game has become an interesting long-term bet among the decentralized metaverse degens.

We don’t know what the metaverse will look like, or whether there will ever be one or multiple giant virtual worlds hosting alternate versions of our reality. The matter of fact is the current metaverse scene is ruled by the GameFi industry, with investors, both institutional and retail, adamant not to miss out on the next big thing. Therefore, it doesn’t sound unreasonable to claim that the next few years will belong to blockchain gaming, with some of the mentioned current GameFi leaders possibly superheading the trend.